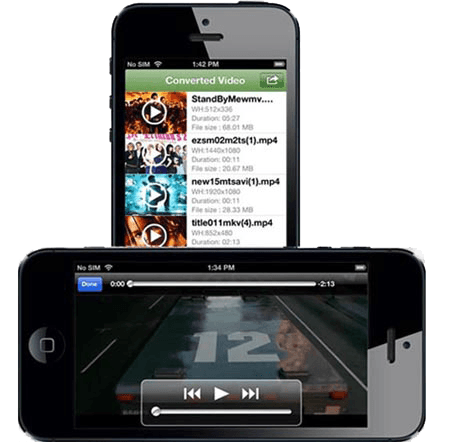 For watching videos and movies on your Apple’s iPhone, iPod or iPad, you have to convert them in proper format. For converting them in suitable extension, there are thousands of software available on internet. Most of the video converting apps are paid and you need to buy them. But, there are also some free software that can make you happy. So, in this post, i am going to share top, free and best video converter for your MAC (iPhone, iPad, iPod).

‘Any’ is a best video converter running on windows xp, 7, 8 or 8.1. You simply have to insert video from your computer drive or internet, select any format in which you like to convert the video and then click “Convert Now” Button.

It is also able to convert videos for Microsoft as well as Sony devices. After done! copy that video in attached smartphone and enjoy watching it.

Mega is another best video converter for iPhone, iPad and iPods. Unlike other softwares, it is more fast, simple and intuitive. It is also very compact as it takes only 20 Mb on your computer or laptop’s hard drive. Before using Mega, you have to install “.NET Framework 4” on your PC, if you don’t have – it will let you know.

Total is the most popular and easy-to-use converter app which is one of the best video converter that are available for free. There are multiple formats available that you can use according to your need. People mostly use it for converting videos for their idevices like iPad, iPhone and iPod, but it also works better for Windows and Android Phones.

This best video converter PC application can change the video file format to suitable iPhone, iPod & iPad file easily. The features for this software are pretty easy and have nice user-experience. Unlike other top video converters, it doesn’t take more time for doing its task. You simply have to add video > choose file format > select output destination > Convert and That’s it!

In the free version of Wise, you can convert video files which are less than 30 minutes. For more, you have to pay. Still its a best video converter which is simple to use and converts video for Smartphones ( including Android, window phones, Apple devices) and Windows OS. Simply choose or drag the video >> choose format >> Browse for output file location >> Convert It. This will automatically convert video file and save them on the destination folder.

Read More
All people have their own reasons of having password on their smartphones. More often than not its about…
Read More
iios

Read More
Table of Contents When Adobe After Effects was being created?Make a big scene bigger in movies and televisionYou…
Read More
WWindow

Read More
Table of Contents Which Encryption options can you use?Before you start to encrypt files and folders in Windows…
Read More