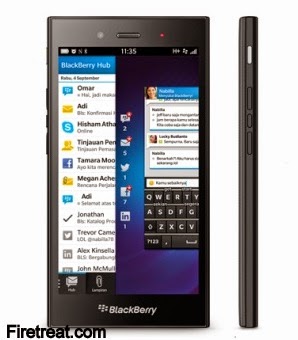 The Black Berry has just launched its new phone called Blackberry Z3 in indonesia. The device is having a 5-inch 540 x 960 pixels Capacitive Touch display. It is a blackberry’s one of the Big Screen Phones which is having a RAM of 1.5 GB and 8 GB internal storage which is also expandable to 32 GB. The device is capable of having a micro-SIM.

The latest Blackberry device is having a 5 MegaPixels, auto-focus Rear camera which is capable of taking High Definition pictures with a LED Flash. Z3 also includes a front camera which is of 1.1 MegaPixels. The Phone also has the capability of Wi-Fi Hotspot.

If we talk about OS, Blackberry Z3 is based on ‘BlackBerry 10.2.1 OS’ along with a chip-set of “Qualcomm MSM8230 Snapdragon 400” and “Dual-core 1.2 GHz Krait 200” processor. Accelerometer and Proximity are the two sensors that are found in this new device. If we talk about the color, there is only 1 color available i.e: Black and comes along with a non-removable Li-Ion 2500 mAh battery.

Read More
Table of Contents What are the “Real reasons for Bad SEO?”Step by step instructions to distinguish “Bad SEO…
Read More
HHow to