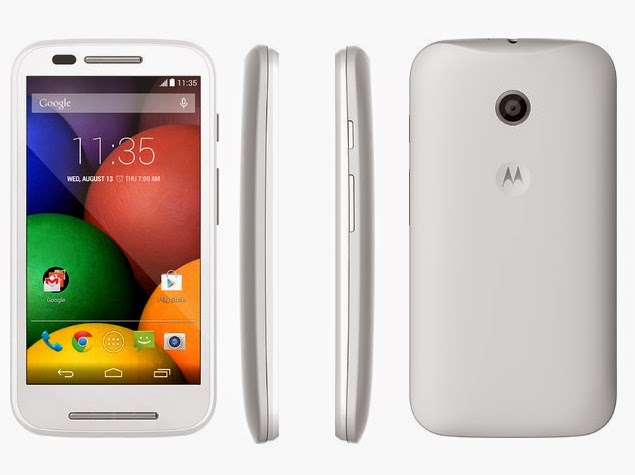 Motorola has just launched its dual-SIM smartphone ‘Moto E’ in India carrying a pricetag of Rs.6,999. The phone will be available exclusively via the online retailer Flipkart from Today on 14th May.

‘Motorola Moto E’ comes with the 4.3-inch display with a HD (540×960 pixel) resolution and 256 ppi pixel density. Motorola is also touting ‘Corning Gorilla Glass 3’ screen of the phone, along with its ‘water-nano coating’ which provides a measure of the water resistance.

It is powered by the 1.2GHz dual-core Qualcomm Snapdragon 200 processor along with the Adreno 302 GPU alongside having 1GB of RAM. The Moto E is the dual-SIM phone that supports the Micro-SIM cards and ‘intelligent calling feature.’ It runs on the latest Android 4.4 KitKat.

Motorola’s latest budget comes with the 5-megapixel rear camera, but it has no flash as well as front camera that disappoint many. The smartphone comes with a 4GB of internal storage, which is expandable via microSD card up to 32GB.

The smartphone is having a 1980mAh battery and supports 124.8×64.8×12.3 dimensions, while weighing 142 grams. Its connectivity options including 3G, GPS with GLONASS, Wi-Fi 802.11 b/g/n, Bluetooth 4.0, FM Radio, Micro-USB, and a 3.5mm audio jack.
Moto E smartphone comes in 2 options Black and White colours, but the interchangeable backs let you switch to the other colors like Lemon and Turquoise.

India is amongst the first set of markets that will be going get the Moto E. The phone is currently listed in White and Black variants on the Flipkart.

The company also loaded some software features in new smartphone, such as Motorola Assist, Migrate, and Alert.

At launch event in the Delhi, Motorola has announced that it was now operating in more than 44 countries. The company claimed that Moto G had been very successful, terming it a best selling smartphone that Motorola has produced. The Moto G was “Top selling phone in the Brazil,” Motorola added.

Read More
inSha Editing photos is like the applying finishing touches to the painting. Photos clicked often do not look…
Read More
TTechnology

Read More
Keep in mind the Oppo R5? Yes, the same gadget that was only 4.85 mm thick and thus,…
Read More
TTechnology

Read More
An Earthquake of 7.5 size struck in Nepal and East-North of India on 25th of April. This earthquake…
Read More