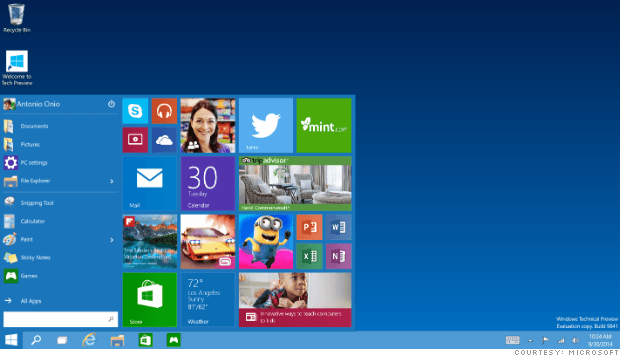 Yes, new window will not be windows 9 but it will be windows 10 that is introduced by Microsoft on Tuesday at an event in San Francisco. Microsoft focused on the features thats will be beneficial for business customers.

Return of the Start menu: Start menu that was removed in windows 8 is now back in new windows 10 with great feature like personalized space for favorite programs, apps and websites.
Apps in windows: In windows 10, Microsoft has changed the format of apps from windows store and regular desktop programs. But now run in windows can be resized and minimized from the bar at top.
Multiple desktops: Windows 10 is having a multiple desktop function now which is already enjoyed by Mac users for years which provides ability to create and swap between the different desktops.
A Soup-ed snap: The snap feature which allow window users to work on the multiple apps at once on same screen is now recreated to a layout for up-to 4 programs at once.

Latest Task view button: A latest button on the taskbar allow users to see and manage all the files and apps that are open on the one screen (old Alt+Tab trick).
Tuesday’s announcement reveled that windows 10 will be more beneficial of business users by providing new useful features rather than the old window features. Microsoft also said windows 10 will get run on tablets, Pc’s, phones and x boxes. Company didn’t provide the release date of windows but it shows the features of new windows for the feedback of people.
8 Shares:
Share 8
Tweet 0
Pin it 0

How to add meta keywords, description to your blog

Read More
Screenshots are the proof of something that you are seeing on your computer’s or laptop’s screen. You can…
Read More
TTechnology