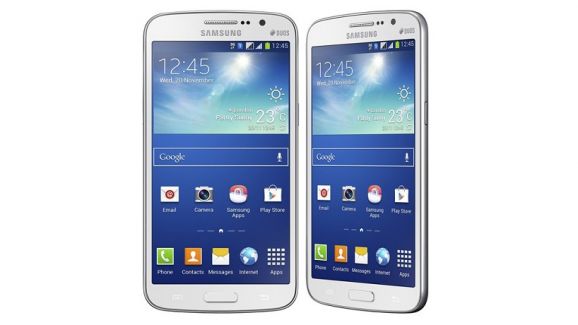 The new Galaxy smartphone is packed with 5.5 inch display size which is a bit bigger than Grand 2 having 5.25 inch screen. The impressive point is that Galaxy Grand 3 is having 1280 x 720p display at High Resolution which definitely attract the users.

As compared to Samsung’s Galaxy Prime, rear camera is upgraded from 8 MP to 13 MP. The front facing camera is 5 MP. Both cameras have the ability to capture full HD 1080p videos. Back camera is also attached with LED flash light for capturing clear photography and videography.

Samsung Galaxy Grand 3 is operated on Adreno 306-GPU and Android 5 Lollipop. Device is having 64 bit snapdragon 410-chipset along with quad-Cortex A53 processor which is clocked at 1.2 GHz, this is surely better than previous Grand series phones. Galaxy Grand 3 runs on 1.5 GB RAM which is similar to its predecessor.

Galaxy Grand 3 will be only available in 16GB (expandable using MicroSD Card up to 128GB) model from this month or next. The dimensions of device are 146.0 x 74.8 x 7.95 mm. The device has various connectivity options like GPRS, EDGE, WiFi 802.11 a/b/g/n, WiFi Direct, USB, Bluetooth and LTE. Samsung Galaxy Grand 3 is expected to have 2 color options – White and Black.

How To Insert WhatsApp Emoticons on iPhone or iPad