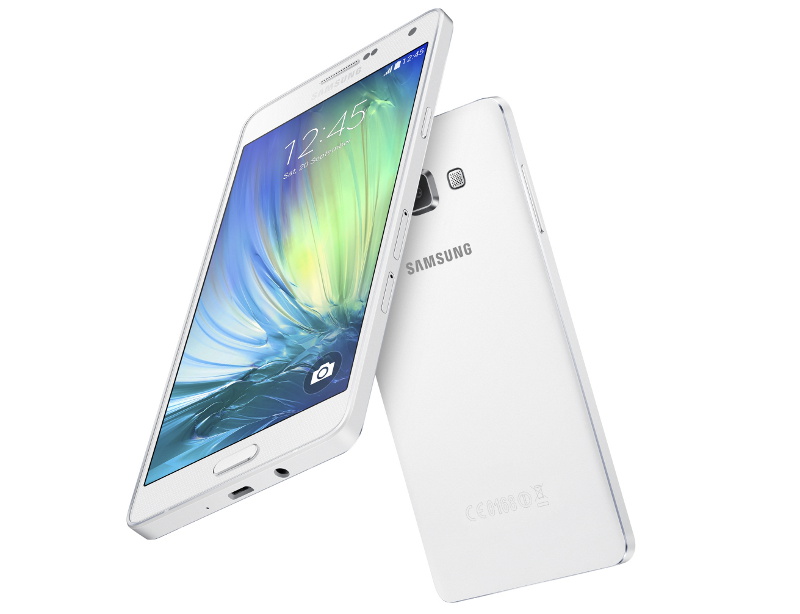 Samsung now has official announced its new Galaxy A7, the company’s newest smartphone from the A series with a metal uni-body design and having 6.3 mm thickness. It is having a 5.5 inch HD Super-AMOLED display, even though official brochure said it comes with the 1080 p display. The device is powered by a processor of Qualcomm Snapdragon 615 SoC along with the dual-SIM variant and a single SIM LTE variant which is powered by s Exynos 5430 SoC. Even, dual-SIM Snapdragon variant comes with the LTE support depending on market. It runs on the Android 4.4 ‘KitKat’ with Samsung’s own UI on the top.

The specifications and features of new Android phone are given below:

Galaxy A3 and A5 are thinner and larger than Apple’s iPhone 5s, while A7 will be a little better than previous phones. The looks are familiar with S series smartphones from round corners to the back including – camera, speakers and LED flash light. The dimensions of Samsung Galaxy A7 are 151 x 76.2 x 6.3 mm or 5.94 x 3.00 x 0.25 inch. It weights about 141 grams which is 18 g heavier than A5.

The device is packed with 5.5-inch super AMOLED screen with 1080 x 1920 pixels resolution. Samsung Galaxy A7 display is brighter and awesome color-reproductive. It is protected by Corning Gorilla Glass 4. Smartphone’s display automatically adjusts its sharpness according to the external light.

The same Galaxy A5’s camera is installed into the Galaxy A7. May be Samsung is using another new lens, but it seems to have the same 13 Mega Pixels rear camera and the 5 MP front-facing. Another fine thing is Samsung’s selfie focused fun tools such as – selfie panorama, beauty face, etc can be found in the new smartphone.

The new Samsung Galaxy A7 runs on the Qualcomm MSM-8939 Snapdragon 615. The LTE Model is having Quad-core 1.8 Cortex A15GHz & quad core 1.3 Cortex A7 GHz processor. While, 3G Dual-SIM model having Quad-core 1.7 GHz Cortex-A53 & quad-core 1.0 GHz Cortex-A53. Operating System on the new A series smartphone is Android OS, v4.4.x (KitKat) which will be up-gradable to Android Lollipop 5.0 in future.

Samsung galaxy A7 includes 3 main sensors – Proximity, Accelerometer, and Compass. ANT+ support. It have non-removable 2600 mAh long-lasting battery. Some other features are:

The smartphone release date is coming in the March. It will be priced at Rs. 30,499 ($490 Approx.) for 16 GB model which is expandable to 64 GB with microSD card. Galaxy A7 is much cheaper than A5 and A3. And it comes in Midnight Black, Pearl White and Champagne Gold colors.

If you feel that there is something wrong in the above information, then let us know in comments! and stay tuned to know deeply about Samsung Galaxy A7 smartphone.

How To Connect Laptop / Computer With TV Screen