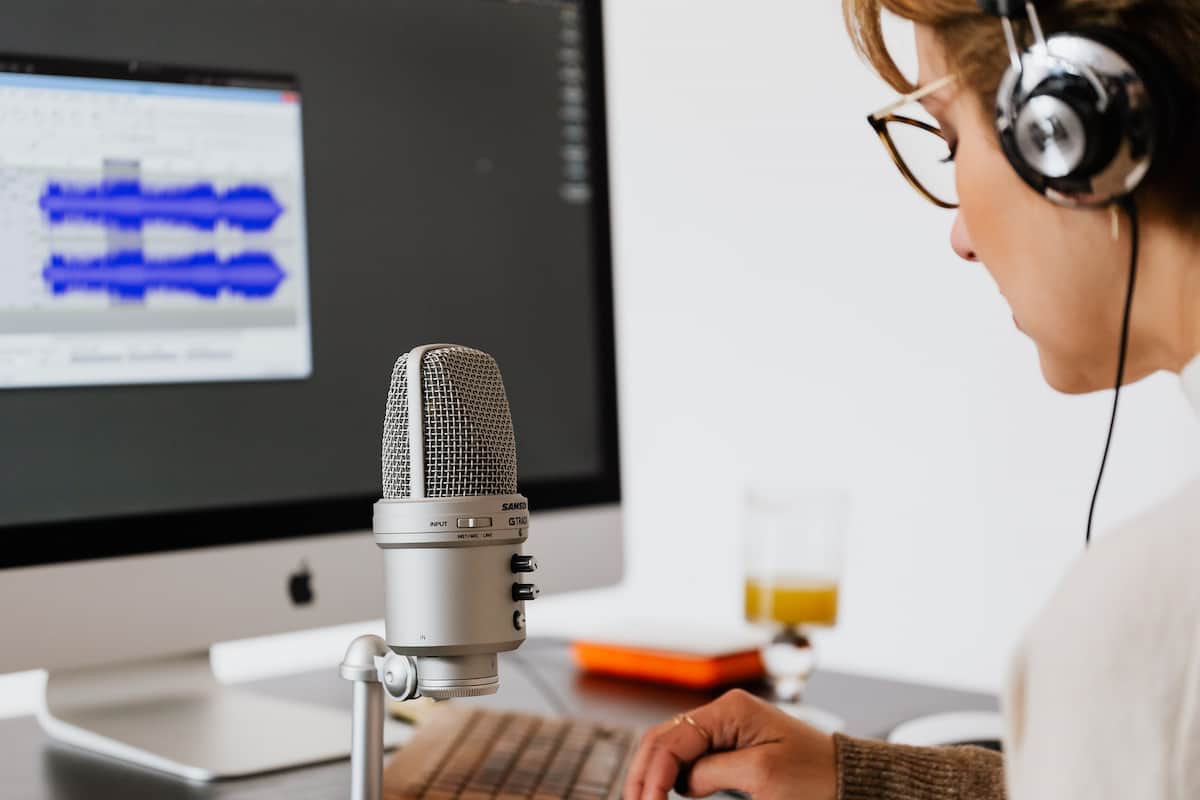 What Is A Condenser Microphone

Let’s start with answering “what is a condenser microphone?” before going on to the other type of microphone.

A condenser microphone is used to extract highly detailed sound audio. As the name suggests, they can pick up generalized audio from the source’s surroundings and condense every audio signal into a sharp and thorough product. A condenser mic is usually used in a controlled environment, such as a studio.

You’ve got a bit of an idea of what is a condenser microphone but you will understand what it is when we go over its different types.

What Is A Condenser Microphone: Its Types

Typically, a large-diaphragm microphone has a diaphragm of at least one inch in diameter. Also, Since the condenser microphone’s capsule surface area is bigger, it is used from a side-facing position.

Large-diaphragm microphones are usually used to record softer voices such as vocals, acoustic guitars, and background audio in the room. They are used to pick up a low sound’s richness through a sharp quality.

This type of condenser microphone usually has a diaphragm that is less than an inch in diameter. It commonly comes in a small and cylindrical shape.

Small-diaphragm microphones are usually used in front-facing positions and the audio transmission focuses at the top end. They can be used in the hand or attached to mount to deliver more stability.

They are known for capturing high-end audio. Often used to record electric guitar sessions, drumming, close vocalizing, however, they can still be used similarly to large-diaphragm mics and vice versa.

What is a condenser microphone? Hopefully, you know the answer to this now. Now, we shall determine which is the best condenser mic.

Although there is a huge variety of condenser mics in the market, with prices going up in the thousands, the best condenser mic for you depends on your application of a condenser mic. With higher prices, you can receive higher quality and superior condenser mics, however, there is no need to spend a truckload of money on a mic without considering your requirements first.

If you are recording voice-over audio for your youtube channel, or podcasting, a USB condenser microphone will provide you with the complete package. If you are recording with a multi-million dollar record label with a massive studio, a large-diaphragm microphone that utilizes XLR output would serve you best.

However, for your convenience, we have listed two microphones from two extreme purchasing options in the market. One from the over $1000 category, and one from the under $100 one.

Without any hesitation, Neumann’s TLM 170 R is the best condenser microphone you can get for the price.

With a multi-pattern condenser with a large-diaphragm, Neumann’s TLM 170 R stands out from its competition. Versatile in nature, it includes 5 settings: cardioid, hyper-cardioid, wide-angle cardioid, omnidirectional and figure-8.

There is a lot of competition in this particular space of the market. After undertaking thorough research, and analyzing many condenser mics, we have concluded that the AKG Perception 170 certainly stands out.

This pencil mic has superb sound quality resulting from its small diaphragm. It performs outstandingly when tasked with recording high amplitude voices or instrumental audio.

We’re done with what is a condenser microphone, let’s get into what a dynamic microphone is.

Now that we have discussed ‘what is a condenser microphone’ in great detail, it is time to enhance our voice onto its counterpart: the dynamic microphone.

Essentially, in the world of recording microphones, there are only two types: condenser and dynamic.

A dynamic microphone, typically known as a transducer audio device, converts sound energy into audio energy through a conductor-based diaphragm.

Similar to how a condenser microphone has two types which were previously discussed, a dynamic microphone consists of two types as well: moving coil microphones and ribbon mics.

Commonly referred to as dynamic mics, moving coil microphones use a coil that is glued to a membrane. This coil is attached to a strong magnet that resonates and captures incoming sound waves as they hit the magnet. The membrane and coil moving, in a magnetic field, creating a voltage in the coil, this in return gives rise to sound waves.

The ribbon mic is essentially similar to a moving coil microphone. However, there is one small difference that makes ribbon mics more efficient.

Ribbon mics, instead of possessing a coil attached to a membrane, possess a thin layer of aluminum foil. Since the thin piece of aluminum foil is lighter, it can mimic the movements of sound waves more effectively.

The Best Choice For You

The Shure SM57-LC Cardioid Dynamic Microphone is by far the most highly used and recognized dynamic microphone in the market. Due to its incredible frequency response, it can record loud vocals as well as softer vocals.

It has the unique trait of versatility that allows it to be used in studios or closed settings, or on-stage.

You already know what is a condenser microphone and a dynamic one, but here we will discuss the differences between the two in a bit more detail.

The debate of condenser microphone vs dynamic microphone has been existent since the start of modern studio recording back in the early 2000s.

Condenser microphone vs dynamic is an interesting debate because there are many differences between both sets of microphones.

Dynamic microphones are typically used outdoors, especially when performing live. This is because they act as loudspeakers themselves. They are not the only source of sound at a large concert.

Both condenser microphones and dynamic microphones have different specialized applications. Several instances require special use of either one of the two.

To record vocals, a condenser mic, either large or small, is your best option.

Mind you, a dynamic mic will get the job done too. But the vast majority prefer using condenser mics.

Since dynamic mics are good with recording louder sounds and are cheaper as compared to condenser mics, it is usually a good practice to record your electric guitar sessions from an amp. They also have the added feature of being robust.

Acoustic guitars are best recorded through a small condenser mic because the quality stays intact to the highest extent. Moreover, condenser mics are generally better in recording softer sounds as they do not hinder the sound’s true sharpness and audibility.

Relatively speaking, dynamic microphones are a cheaper option. This might suit you if you are a beginner, and the quality does not bother you to a great extent.

However, condenser microphones come in all price ranges, and you can get them for under $100, as was mentioned previously.

Dynamic microphones are considered to be more robust. Hence, they are used in concerts or any other live performance.

This does not mean that condenser microphones break like flowers. They are considered robust as well.

Dynamic microphones do not require external power, hence they are more accessible and portable to use as compared to condenser microphones.

Condenser microphones require phantom power, or any other power source to operate.

Before we jump on mentioning the best mic for podcasting, you need to understand a crucial concept: the difference between XLR and USB.

USBs are a better option for those podcasters who are looking to record themselves only, and not record more than 2 people simultaneously. USBs are a reliable option because they are substantially cheaper and are set up more easily and quickly.

XLRs are more trickier and time-consuming to connect to your computer because they require additional equipment in connecting. However, you will be able to produce audio recordings of the highest degree as the sound quality on XLRs is simply amazing. And, you will also be able to connect a larger number of mics simultaneously.

The best mic for podcasting for you depends on your requirements, your experience level, and scale of work, the number of guests you will be having, et cetera. Now that you know the differences between XLR and USB, you will be able to make a sound decision when it comes to choosing a microphone.

The Audio-Technica ATR2100x-USB is a well-regarded USB mic. Its simple design, coupled with a USB-C input, provides consumers with ease and reliability.

Interestingly, it has both USB and XLR capabilities making it more accessible to use. A smaller size means that it is a portable option as well.

Heil PR-40 is a popular microphone. With a reasonable price, it gives you a 28Hz-18kHz frequency response that is quite impressive.

During a live stream, the sound quality holds critical importance. If the sound quality budges, your stream will simply be a nuisance to the viewer. So, streamers pay close attention to their microphone preferences.

Our pick for the best microphone for streaming has to be Shure SM7B.

Shure SM7B provides you with a frequency response time of 20 Hz-20 kHz.

It is known for minimizing background sound to a great extent, it provides users with a high-quality sound experience, and it is durable as well. We have often seen streamers throwing their microphones in rage, but afterward, most streamers have regarded this microphone’s durability as it did not break.

There are cons to Shure SM7B, however. All of this greatness comes at a high price making it the best microphone for streaming. A common streamer would probably not be able to afford this microphone.

Other than that, it only comes with an XLR option.

Hopefully, this article on what is a condenser microphone covers a range of different elements from the best microphones to the different types and their features. Stay tuned to get more updates on different gadgets or computer accessories.

What Happens When You Reset Your iPhone?

Do Space Heaters Use A Lot Of Electricity?