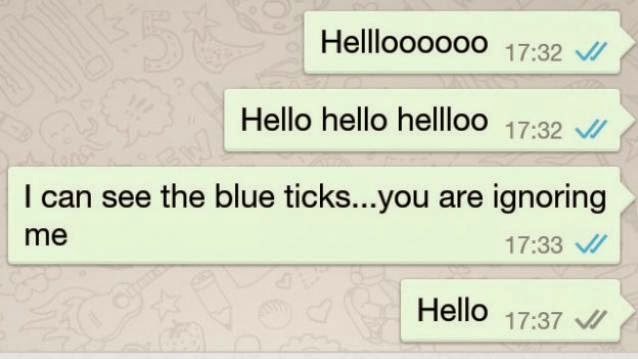 How to disable WhatsApp’s Blue-Ticks Feature

Last week, WhatsApp launched the ‘double blue ticks’ feature that let users know when their messages are sent and read that didn’t go down well with many users. With this new update, you can’t ignore a message or now you can’t excuse yourself by saying that, “I didn’t read your message earlier or before” or “Just saw it”. Moreover, WhatsApp didn’t provide its users an option to disable the blue ticks either.

But WhatsApp also provided its another feature to get rid of it. Once it get enabled, people cannot see the blue tick marks even if you have read their messages. This would definitely provide relief to many. User may simply go to the ‘Privacy Settings’ and enable/disable the feature. Some users do love this feature and some hates it.

As of now, Android as well as iOS users can download the new version of app that brings the new feature. Some users have to manually download the “WhatsApp 2.11.44” version as it is only available on WhatsApp’s official website and still not released on Google Play Store.

There’s no word on when Windows Phone users will get this update.

Read More
Apple users with jailbroken iPhones, iPods or iPads are unable to update their devices to iOS 8 via…
Read More
AAndroid

Read More
The Apple Watch 4 has arrived and with it watchOS 5, however you needn’t bother with Apple’s most…
Read More
iios

Read More
Apple most probably releases its next-generation iPhones in September month of each year, but a new report suggests…
Read More