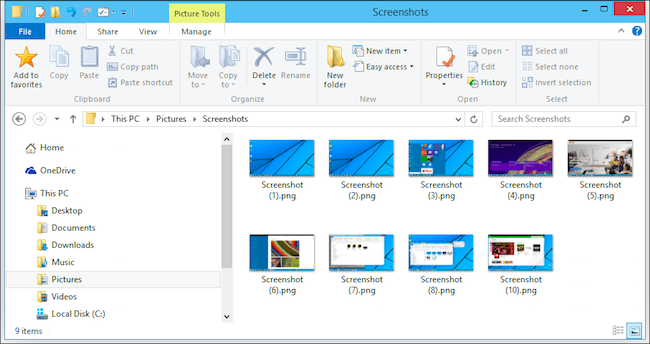 How to Capture Screenshots in Windows 8/8.1

Screenshot is the great way to prove the point, build a case or just send somebody something interesting from your screen. All major platforms now support taking the screenshots. Windows and MAC OS both are such major platforms. If you do not know that how to take screenshots in windows and MAC, then you are really missing out. This post will show you how to take screenshot in Windows 8 or 8.1. From my previous post, you can also record the screen in windows by using a screen recording software. In the another post, Capturing Mac OS screen is also explained.

Learn to Capture Screenshots in Windows

Any Windows from previous versions (windows xp, vista, 7, 8) to 8 or 8.1, is going to use the old method of taking screen shots by PrtScn (Print button)-copy-Paste-Save method. But in Windows 8.1, Microsoft has finally introduced the native screenshot feature, means that when you take a screenshot, it get saved to hard disk as a file.

PrtScn (or Print Button on the page) copies the screenshot to the clipboard. Windows + PrtScn takes the screenshot, which then get saved to the your Pictures or Screenshots folder.

Another shortcut you should remember is ALT + PrtScn which copies the screenshot of the displaying window to clipboard. For having more control over your Windows screenshots, you can also use included Snipping Tool.

If you want to quickly share the Screenshots on Windows 8.1, always use Share Charm. This method is very easy and quick but you have to use the ‘Windows Store apps’ and it is more ideal when you do not have the key-board attached.

On most of the Windows tablets, the keyboard may not be present always. All tablets are certified to run the Windows must have a ‘Windows button’ on front of the device. To take the screenshot, just press the Windows Button + Volume Down.

How to Capture Screenshots in Mac OS X

Read More
Windows 10 is the most drifting Operating framework form of Windows which is propelled by the Microsoft Corporation.…
Read More
TTechnology