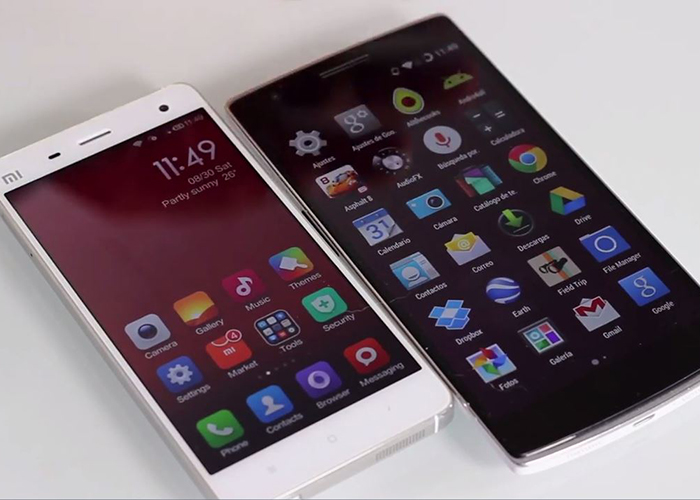 OnePlus One or Xiamo Mi4 – Which is Better Smartphone?

Two new smartphones were launched at different times, but their prices are very close. OnePlus one is available at Rs. 21,999($390 approx.) while Xiamo Mi4 which is recently launched is priced at Rs. 19,999($360 approx.). These both smartphones are mid-range and packs with great specifications. But, which phone is best for you to buy – OnePlus one or Xiamo Mi4

Both devices have closer rates, but they have big differences. In this article, i am comparing both the gadgets based on their different features and specifications.

OnePlus One or Xiamo Mi4

OnePlus One is bigger as compared to Xiamo Mi4 such as, both having sizes of 152.9 x 75.9 mm and 139.2 x 68.5 mm respectively. Smartphones have 8.9 mm thickness. The Mi4 is lighter in weight and more handy than One, but OnePlus has rough-matte texture on all sides and back, which attracts number of users. Mi 4 has plastic body but metal on edges.

OnePlus one or Xiamo Mi4 which is having better colour options?

Well it depends upon you if you like black/white because One is available only in White (India) while Xiamo 4 is available in Black.

Mi4 packs with a 5-inch display and OnePlus with 5.5-inch display. Xiamo’s smartphone screen is much sharper as compared to another. Both the phones are running on same Qualcomm Snapdragon 801 processor with 3 Gb of RAM. The Mi4 doesn’t support LTE on Indian bands while OnePlus one do.

Both smartphones are available as 16 Gb and 64 Gb models in international market, but in India, Mi 4 is only available in 16 Gb. Both the devices are single SIM and without having a SD-Card slot.

OnePlus one or Xiamo Mi4 which is having huge battery life?

While Xiamo 4 packs with a 3080 mAh battery, OnePlus with 3100 mAh. But, Mi4 has a more long-lasting battery than other.

While having same processer and Random Access Memory (RAM), both the smartphones have difference in their performances. OnePlus One has less animation which makes it to operate faster than Mi 4.

Both One and Mi4 have 13 MP rear cameras which are able to create 4k videos @ 30 fps. OnePlus One clicks dull images and Xiamo’s phone captures sharp and more colorful images.

Both the smartphones are available at reasonable price range. Mi4 is more handy phone and One have big screen with leather body. Both devices have non-expandable space and both have same processer and RAM.

Now, its up to you which to buy – OnePlus One or Xiamo Mi4

Lets us know in comments which attracts you most!

Read More
Individuals could soon be utilizing their cell phones to battle a lethal type of air pollution, because of…
Read More
TTechnology

Read More
Do you remember Samsung Galaxy Beam? It was that first biggest smartphone in the market that included the…
Read More
TTechnology